The Birman is more than just a beautiful cat - It is a cat with both a history and a legend. Many people do not realise that the Birman has been around for centuries as the Sacred Temple Cat of Burma. 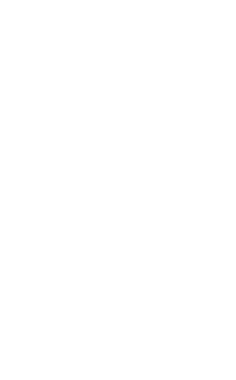 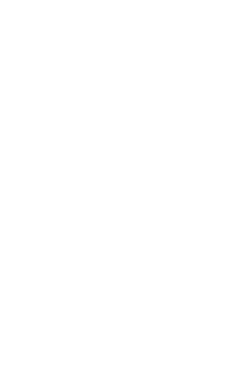 The Birman comes from the deeply religious and ancient land of Burma, whose people believe in the reincarnation of souls. Combined with their deep respect for their priests, this helps us to understand the legend surrounding the Birman Cat. 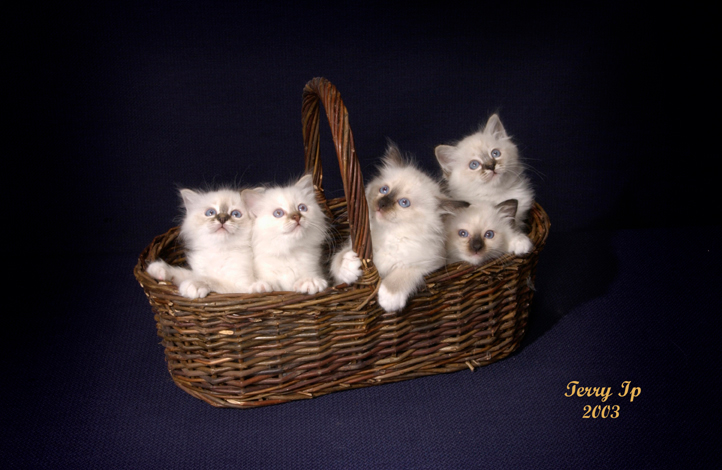 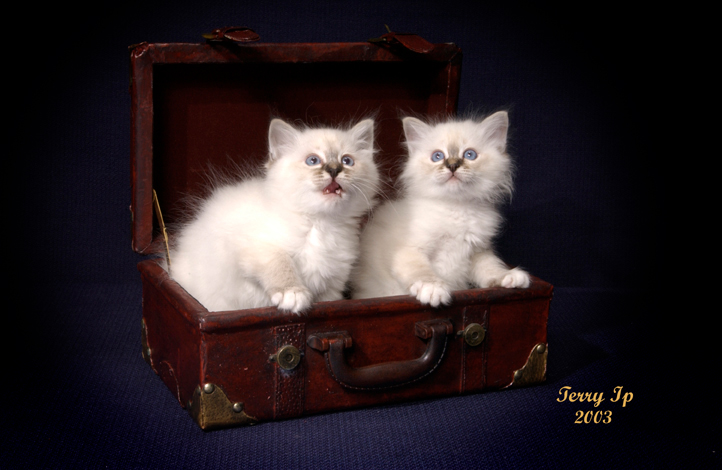 Also, it is important to remember that the Indian Brahmins were bitter enemies of the Khmer people, a civilisation which flourished from the 8th to the 15th century. In order to avoid their persecution, the Khmer fled north to the mountains, in which difficult country the Priests founded their temple, and practised the secret rites which were closed to all but the higher castes among their own people.

The legend relates to the temple of Lao-Tsun, built to worship Tsun-Kyan-Kse, a golden goddess with sapphire blue eyes, and one of her priests. Mun-Ha and a white temple cat. Sinh. who frequently accompanied Mun-Ha as he knelt in meditation before the golden goddess. As the holy priest prayed, Sinh would gaze at the brilliant goddess.

One night as the moon rose and Mun-Ha was kneeling before the sacred goddess, raiders attacked the temple, and Mun-Ha was killed. At the moment of Mun-Ha’s death Sinh placed his feet on his fallen master and faced the golden goddess. Immediately the hairs of his white coat were as golden as the light radiating from the beautiful golden goddess, her beautiful blue eyes became his very own, and his tour white legs shaded downwards to a velvety brown: but where feet rested gently on his dead master, the whiteness remained white, thus denoting their purity. 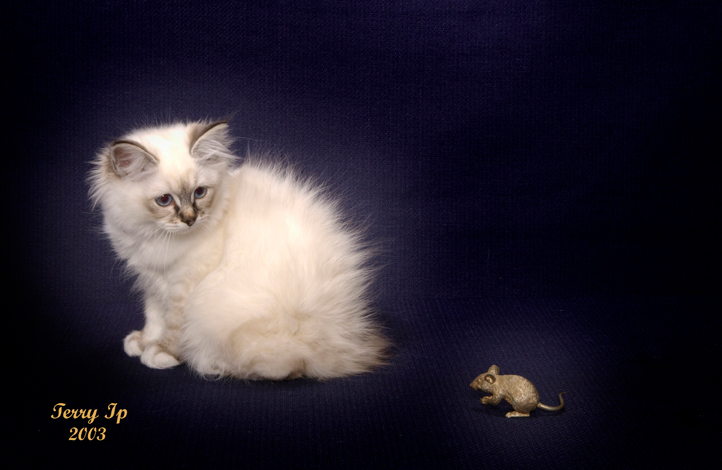 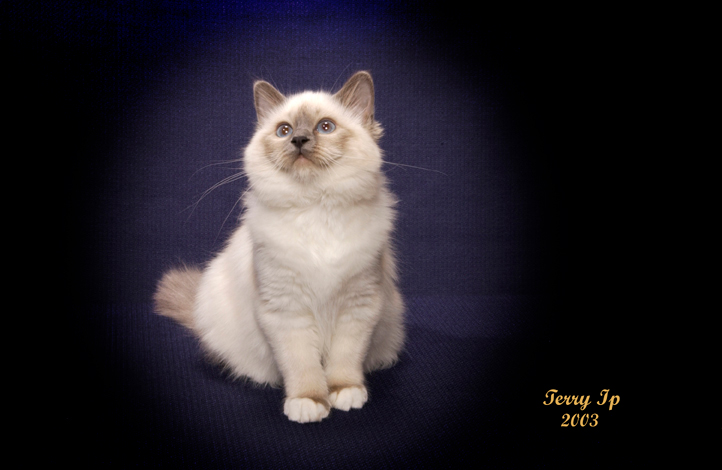 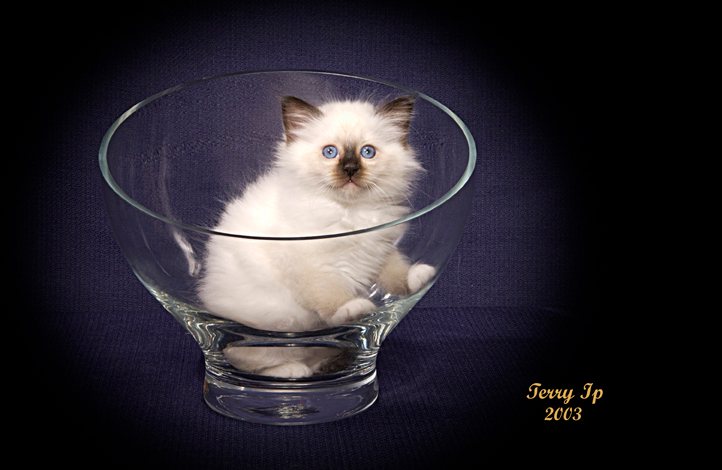 The next morning the temple radiated with the transformation of the 100 white cats, which like Sinh, reflected the golden hue of sunset.

Sinh. the golden cat of Burma, never left the throne after his masters death. Seven days later he too died, carrying with him into Paradise the soul of Mun-Ha, his beloved master. According to the beliefs of the temple whenever a sacred cat died, the soul of a priest accompanied it on it's journey to the hereafter.

This legend does contain a great deal of fact - the Birman cat did live in the Temple of Lao-Tsun. which is situated near Lake Indawgi, in the mountainous region of Northern Burma. More recent history which brought the Sacred cat out of the Temple and into the world at large, occurred during the Burmese war of 1885. Two men, August Pavie and Major Russell-Gordon used their positions in the British Army to protect certain Kittahs or Priests whose lives were in danger from their old enemy and Brahmins.

n return the Kittahs allowed them entry into their secret and sacred places, including the Temple of Lao-Tsun.

The Kittah Lama (Head Priest) of the time gave Major Russell-Gordon a plaque depicting a Birman at the foot of an idol and later showed him the Temple Cats and explained the legend to him. So at that time, centuries after the birth of the legend, there seems to be at least 100 temple cats surviving.

Many of the Kittahs escaped and crossed the mountains of Burma into Tibet, taking with them their sacred cats. There they formed a new subterranean Temple of Lao-Tsun, the dwelling place of their gods. This temple is a one of marvels of Indo-China, not far from a lake and it is hidden in a mass of immense peaks.

Later, in 1919, a pair of Sacred Temple cats were sent to Major Russell-Gordon and August Pavie, who were by that time living in France. This gift was in grateful thanks for the assistance both men had given in preventing the temple being over-run by the invading enemies. The ocean trip proved tragic however, for the male died. But it was found that the female was pregnant and thus the breed survived and became recognised in France in l925.

Unfortunately, the efforts of France's breeders of that time almost came to naught with the advent of the Second World War, as only a single pair of Birmans survived the war, but this was enough to set the foundation for a resurrection of the breed. By 1955 the Birman was once again a recognised breed, and outcrossing to other breeds was not permitted.

From France, the Birman spread across Europe, and 1966 saw the first Birman imports into Britain, and 1967 saw the CFA in the United States recognise the breed This year also saw the arrival of the first Birmans into Australia, and it was in the early 1970’s that these beautiful cats found their way across the Tasman to New Zealand.

The original Birman was not as we know them today, as of course they have been improved by selective breeding to achieve better markings, coat and eye colour. As well as the original Seal point and Blue point varieties, Chocolate point, Lilac point, Red point, Cream point, Tortie point, Lynx point and Silver Birmans are now being bred in ever increasing numbers.